Born Eliza McNamara around 1790, she was apparently born in Ireland.. She became the wife of Sgt. John Kingswood. A soldier who had participated in the Continental War in 1815, however not in the Battle of Waterloo. The couple eventually arrived in Australia in the 1820s.

“A much respected soldier” - John and his wife settled in the Kurrajong district, where they grew maize. They then moved to Richmond and lived in a property in March Street. They had one daughter, Mary who was born in the late 1820s. In 1845, Mary married Richard Gow 1822-1889. Richard was the eldest son of convict William Gow 1797-1872 and Maria Dunston 1807-1865. They had at least one son, Francis John, who was born in the Hawkesbury in 1847. Regrettably Mary died 24 October 1865, aged 36 years old. She was buried at the Catholic Cemetery in Windsor. Her headstone (pictured below) indicates that she may have been ill for a long period prior to her death. It states:

Sickness sore long time I bore
Physicians was in vain
Till God did please to give me ease
And free me from my pain.

Mary’s husband, Richard Gow, died on 7 October 1889 in Cudgegong.  Despite the early death of their daughter Mary in 1865, both John and Eliza lived on in March-street, Richmond. John Kingswood reached the ripe old age of 95 years old, and passed away in January 1887.  The Freemans Journal reported that "Another Good Old Colonist Gone." It stated that John Kingswood died at the residence of  his grandson, Mr F. J. Gow,

New South Wales has lost one of its very oldest colonists, and one who has won the highest respect of his neighbours. Mr. Kingswood, who had reached the grand old age of 95 years, came to the colony with his wife (who survives him, although she is also 95 years old) in 1826. The good old gentleman preserved all his faculties up to the last, and until attacked by the short illness which carried him off, was able to attend to his ordinary business affairs. Mrs. Kingswood is a fine example of an old lady who has led a simple life, and now, at the age of 95, is as clear in intellect as she ever was.

Eliza Kingswood celebrated her 100th birthday and at the time it was recorded that “her sight and intellect were unimpaired” and she did not require spectacles for reading and was still reasonably mobile. Yet when aged 98 years, Eliza was interviewed for a popular magazine, and although possessing all her mental faculties was not so physical active. Obviously the media liked to stretch the truth, even in those days. The article from the Australian Town & Country Journal 6 August 1892 states:

…Elizabeth Kingswood, 98 years of age, whom I interviewed. Her lower limbs are partially paralysed, otherwise she is as healthy as possible. She is constantly reading, and can read the smallest print without the aid of glasses. She informed me that previous to five years ago she required glasses, but not feeling the need of them, owing to either the loss or breakage of her pair, she has done without them ever since. She stated she went to Monarco[sic] with her parents about 1801 ; she was then between 6 and 7 years of age. Her father was a soldier, and served in the Battle of the Nile. Her husband was a sergeant in the 57th Regiment, which was known as the "Die Hards." They used to live in the old barracks, now Wynyard Square, Sydney. 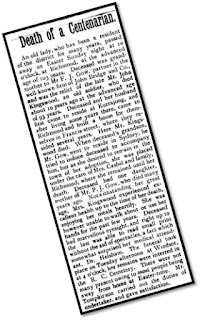 Eliza lived for another three years, and died aged 103 years in Bosworth Street, Richmond. Her death, on the 2nd April 1893, was recorded in numerous newspapers including local newspapers as well as Australian Town and Country Journal, Singleton Argus, Clarence and Richmond Examiner, the Sydney Morning Herald and even Broken Hill’s Barrier Miner.  The cause of death was recorded on her death certificate as diarrhoea and exhaustion, both treatable but disastrous for an elderly person. She was ill for a week and seen to by Dr. W. M. Helsham of Richmond, furthermore on her last day on earth.

Eliza was buried on the 4 April 1893 at the Catholic Cemetery in Windsor. The service was taken by Rev. E Hanrahan and William Tomkinson was the Undertaker. The details of her death appeared in numerous newspapers and an obituary was published in the Windsor & Richmond Gazette, 8 April 1893, and read:


An old lady, who has been a resident of the district for many years, passed away on Easter Sunday night at 10 o'clock, at Richmond, at the advanced age of 103 years. Deceased was grandmother to Mr F. J. Gow partner in the well-known firm of John Bridge and Co., and was the relict of the late Mr, John Kingswood, an old soldier, who died about 10  years ago at the advanced age of 95 years. Deceased and her husband first came to reside at Kurrajong, and after living some years there, came to Richmond and built a house for themselves in Francis-street, where they resided several years. Here Mr. Kingswood died. When deceased's grandson, Mr. Gow, went to reside in Sydney, he tried to induce deceased to accompany him, but as she desired to remain in the town of her adoption, she was placed under the care of Mrs. Cashel and family, Richmond, where she remained until her death. Deceased had one daughter, mothers Mr. F. J. Gow, who died many years ago. Notwithstanding her great age, Mrs. Kingswood experienced excellent health up to the time of her death; enjoying her meals heartily. She was however unable to walk about or use her hands for the past few years. Deceased had marvelous eyesight, and right up to the last was able to read small print without the aid of spectacles, a fact which somewhat surprised her medical attendant, Dr. Helsham. The funeral took place on Tuesday afternoon at Windsor, at 4 o'clock, her remains were interred in the R. C. Cemetery. There were not many present owing to most people being away from home at Easter-time. Mr. Tompkinson carried out the duties of undertaker, and gave satisfaction.

The headstone in the Catholic Cemetery at Windsor also records the death of Marjorie Mary Gow a four month old baby. Marjorie was the daughter of Francis and Clara and died the 24 August 1898 aged 16 weeks.  Her death was registered in Woollahra. By this time, Francis and his family were living in the Eastern Suburbs and he was working as a produce merchants.

Francis Gow passed away in 1928 aged 81 years. He lived at ‘Maybourne Lodge’ Cook Road, Centennial Park. He worked for many years at John Bridge & Co. in Sussex Street but in 1929, he was a director of the Hotel Sydney Ltd. and the Ranelagh Hotel in Robertson. He was “survived by a widow, two daughters, and five sons. The funeral took place at Waverley Cemetery.”

Posted by Michelle Nichols at 01:36

This blog has been selected for permanent preservation in The National Library of Australia's Pandora Archive.

Michelle Nichols
This blog will be a record of stuff I find interesting, discover or write. Interested in family & local history, cemeteries, reading & libraries, old stuff, research & writing, photography, wine and fine dining plus lots more! Immersed in local history, fascinated by technology and social media and would like more time to spend doing the things I love!